The World Health Organization has declared glyphosate, the main ingredient in the herbicide Round-Up, to be a probable carcinogen. Round-Up is used on almost all corn and soy products grown in America, and corn and soy are used in most of the processed foods found on supermarket shelves. The only way to avoid residues of this pesticide on food is to buy organic.

For details, go to:

Environmental Working Group continues to conduct cutting-edge research to help us understand the effects of toxic chemicals in the environment on our health. Click below to see a disturbing but important article published in the newsletter of Beverly Hills doctor of integrative medicine, Soram Khalsa, M.D!

For details, go to:

Pesticide Action Network's new "Action Center" has posted several issues that need our support - and it's easy to sign a petition and get involved!

Increased use of Roundup on Monsanto's Genetically modified "Roundup-Ready" crops has created new pathogens that can cause sterilty and spontaneous abortions in farm animals (and possibly humans as well). Studies showed that out of 1000 heifers fed genetically modified wheatlage treated with Roundup, 450 aborted their offspring. Control heifers fed with hay experienced no abortions.

Click below to see Dr. Joseph Mercola's one-hour interview with agricultural scientist, Don Huber, Ph.d. It is pretty hair-raising! Then take action by writing to let Agricultural Secretary, Tom Vilsack, know how you feel about it!

Regulators have known since since 1980 that glyphosate, the primary ingredient in Monsanto's herbicide Roundup can cause birth difects in lab animals. See the article at: www.huffingtonpost.com/2011/06/07/roundup-birth-defects-herbicide-regulators_n_872862.html
Posted by Annie Waterman, Secretary at 6:09 PM 1 comment:

Your Taxes Support Pesticides on Our Food

The California Department of Food and Agriculture recently awarded $180,000 to a California agribusiness marketing group to finance a campaign to "correct the misconception that some fresh produce items contain excessive amount of pesticide residues." The U.S. Department of Agriculture - who supplied the tax-dollar grant money - actually maintains a database confirming such residues and the health risks associated with them.

Action Now signed on to a letter with 50 allied groups to protest the award, demand that that it be retracted and that the process for making such grants in the future be reviewed.

To learn more about pesticide residues on our food check out Environmental Working Group's great site www.ewg.org/pesticidesorganics. To see the protest letter and how you can help, go to www.PesticideReform.org and click on the "Outrage" article.
Posted by Annie Waterman, Secretary at 11:18 AM No comments:

The following is partially excerpted from an article today in The Carmel Pine Cone.

"Last week, a California Department of Food and Agriculture spokesman conceded that the State of California would not be able to eradicate the Light Brown Apple Moth," an invasive insect that has been found in large numbers in California counties from Monterey north to the San Francisco Bay and beyond. "The spokesman said they would only be able to control the insect."

Action Now asserts that this distinction is extremely important, because when an insect pest is recognized as established - and therefore can no longer be completely eliminated - the State cannot consider the infestation an emergency. "Emergency" infestations allow for toxic pesticides to be applied without any environmental review, and are thus imposed on communities that have no legal recourse for protecting themselves and their neighborhoods from exposure to the harmful chemicals used.

The article continues: "In September and October of 2007, when eradication was still the goal, the state conducted aerial spraying of moth pheromones - a synthetic chemical intended to confuse males and make it difficult for them to locate potential mates - over Monterey and Santa Cruz county neighborhoods.

"But the operation ran into heated opposition among resident who said the pheromone made them sick. Environmental groups filed lawsuits over the LBAM aerial-spraying program.

Now instead of trying to eradicate the LBAM, large numbers of sterilized moths "are being produced in a facility in Moss Landing as part of state and federal efforts to control the pest. The number of sterile moths produced will increase dramatically over the next six months, an offical told reporters this week."

"So far, the only area where sterile moths are being released is Carneros, a wine region in Sonoma and Napa counties. However, it is not yet clear if the extra moths will be released only in those two counties, or in other areas in California affected by the moth.

" 'At some point in time, we want to release the moths in areas that are generally infested,' Hawkins said. 'We haven't determined where that is going to be.'

"On Tuesday, the state certified the environmnetal impact report for the LBAM program. The EIR found that it was unlikely treatments in the moth program would cause human or environmental damage,* and that more harm would be caused by widespread pesticide use by private parties in absense of the program. The state is currently only considering the release of sterile moths and the placement of pheromone twist ties on trees and plants to get rid of the insect, the EIR said."

*Action Now members have experienced first-hand in the past how EIRs prepared by state and federal agricultural officials never seem to find any adverse health effects caused by their pest eradication programs no matter how many folks report illnesses. But their admission that the moth infestation can no longer considered an "emergency" is welcome news! For more information on the LBAM issue go to Pesticide Action Network's website at www.panna.org and click on "resourses."
Posted by Annie Waterman, Secretary at 8:16 PM 4 comments: 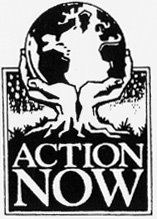 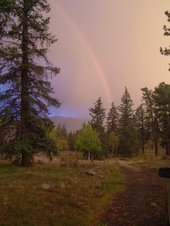